By Rebelstar without a cause

Never trust a man called Dave, especially when he’s really a David.  Dastardly Dave wants to give tax breaks to his friends but there’s a fly in the ointment: poor people are getting in the way.  You must help Dave destroy the poor people, save a fortune and keep favour with business!


From the indirect references of gritty realism in games like Trashman to the more blatant parody of Denis through the drinking glass, many a ZX Spectrum game has a powerful political message.  I may be slow on the uptake, but I think Dastardly Dave has a subtle and cryptic political edge to it too.

The game itself is a good old fashioned shooter, but with a somewhat less aggressive foe than the advancing aliens of Space Invaders.  You are the UDG at the bottom of the screen, which represents either a pointing hand or an amorphous blob (my money’s on the latter).  You must move left and right zapping the meandering paupers, the longer you take to get them all, the more your support dwindles.  It’s a nice touch that each successful hit saves you a whopping 53 pounds, and also that your support can go into negative percent! 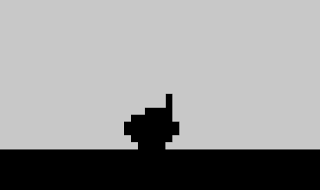 Poor key response, long soundless pauses when you shoot, no sound at all in fact, jerky slow char movement.  CARP!
Dastardly Dave proves that art is better during a recession, thankyou Rebelstar!


Tipshack: Don’t shoot the poor people!
HACK SACK: Large majority: Line 9050 LET SUP=10000
Download here.
And hells bells, this game has not even been on the web 1 hour and hacked versions are already appearing!  Nick’s Nightmare.  The author is as yet unknown, but I've uploaded this as a warning to others that cracked software is not, I repeat NOT welcome on this site, please do not take this as an invite to do more of the same ;-p.