Like most Spectrum fans, I like to think I have my finger on the pulse.  Most of my Saturdays are spent wearing headphones in front of HMV shaking my hips while listening to the latest banging tunes, and occasionally giving a high five to a passing blood.  This means I’m fully aware of the phenomena that is the Dubstep, but for those not in the know here are a couple of quotes from Wikipedia:

If you venture further and listen to some ‘Dubstep’ samples on the web you would be forgiven for thinking it to be nothing more than a bloody racket.  That’s the attitude of a square of course and not my view at all.

The question is, in this post Dubstep age, how are we to take the genre forward? 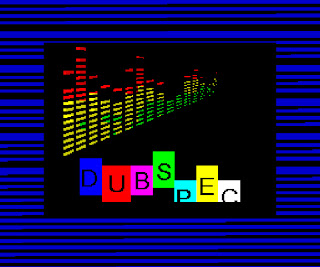 With DubSpec of course!  Lee Spoon’s Advanced Dubstep Generator.  From top to bottom this utility oozes crapness: an irritating (and thoroughly unnecessary) delay at the start, a SCREEN$ with the bottom clipped due to the SAVE message, and an overall crap idea.  DubSpec uses the routine around 1300 that simulates the loading bars, Lee informs me this is the same one often used during the 80’s to make Speccies appear to be loading permanently in shop windows.  So with no key pressed you get the loading noise, press ‘space’ and it warps the sound, exactly like Dubstep.

So what are you waiting for?  Close the curtains, pop a couple of paxmans, plug in the USB disco ball and get jiving to some dubspeccing beats.  Cowabunga!  Thankyou Lee!

Tipshack: Insert 1 NEW at the beginning of the program.
Download the 'updated' version here.
Download the original version with no 34000 'second' delay at the start
Download an RZX of DubSpec in action playing a well known tune, can you guess what it is? (hint - it's classical)
Posted by Dave at 18:40