Genre: Utility: Cellular Automation
This excellent program from Shaun marks the first non-Spectrum entry to the competition.  Game of Life is coded using z88dk for the ZX81.  Despite never owning a ZX81 ‘back in the day’ I have fond memories of my brother using one, its unyielding hard keys (not forgetting the cool squidgy overlay) and horrible CRT picture.
So not being a ZX81 user I have to find a way to play G.O.L.  I was lucky enough to acquire a few ZX81’s from work ages ago, but for some reason when I plug it in it doesn’t work. 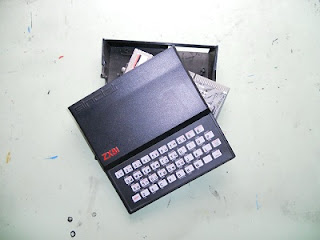 So emulation is the way to go.  Eighty One (can be downloaded from http://www.chuntey.com/) seems to be the most popular so I went with that.  On with the game:

Game of life is a computer model and probably exactly what Uncle Clive hoped his range of computers would be used for.  Shaun’s version follows the standard rules of G.O.L: 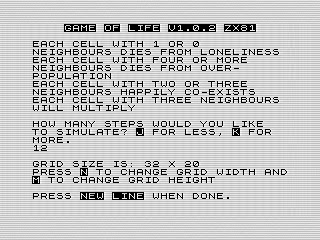 The ‘player’ sets up the initial variables – screen size, number of steps and in a godlike fashion sets the whole experiment in motion.  Typically G.O.L shows surprising and beautiful patterns rapidly dancing before your eyes, however Shaun’s version is subtly different from this in three ways. 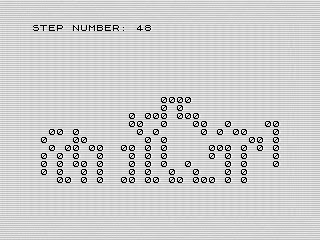 If you choose a small screen (minimum is 9x9) a static arrangement is reached in a relatively small number of steps, though I imagine the larger choices would take practically for ever to do this.  I’m afraid I’m not a very mathsy person, though if anyone reading is I would value their input as to the possible outcomes for larger screen sizes (eg is a static screen inevitable and how long would it take Shaun’s program to reach it?) and G.O.L in general.
I rather like this, and although it is slow, Shaun’s G.O.L is probably a rather nice use of the good old ZX81.
Tipshack: Set the screen to maximum size, and leave running for 13 hours.  At this point the arrangement of zeroes bears a remarkable resemblance to famous comedian and birdwatcher Bill Oddie. 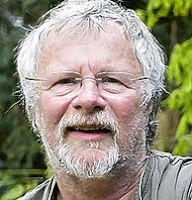 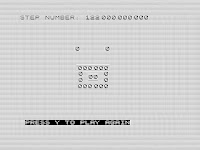