I never played it ‘back in the day’ but this amusing entry from Andrew is a nod to 'Sam Fox Strip Poker' for the ZX Spectrum, released in 1986.  Yes that’s right – there was such a thing as 8 bit scud!

Sam Fox Strip Snap lets you experience all the thrills of strip poker but with a much simpler game (just as well really because I don’t know the rules to poker).  Rest assured I will still be enforcing CGC rule 3.3 despite the fact that this is not actually a poker game.
On to the game.  As the CGC consistently proves, ‘the best pictures are on the radio’, as there are no fuzzy pixel representations of Ms Fox in this game – which I suspect was one of the reasons the original sold so well.  Random card pairs appear on the screen and you must press ‘S’ when you see matching numbers.  Both you and Ms Fox begin with 5 items of clothing, and unlike Same Fox Strip Poker one of those items is not a trilby.  I opted for a cricket hat, tie, socks and a garter.

To begin with Sam is very slow to react, so you have plenty of time to spot and call a pair.  But as she discards more items of clothing she becomes increasingly alert, this is probably because she is reverting to her natural state from her earlier days as a glamour model.  When she is right down to her smalls she is so swift that it is virtually impossible to win.  I only managed it once without cheating!

This is a well designed snap game, nicely constructed bit of code and a funny idea.  I must also applaud Andrew for his attention to detail – I received 2 revised versions from him!  Even more impressive is that he managed to get Ms Fox on board with this project.  Thankyou Andrew!


Dress for the Antarctic: 205 LET myclothes=500
Tipshack: if playing on a real spectrum don't forget to wear your standard issue tin foil underpants to counteract the EM noise. 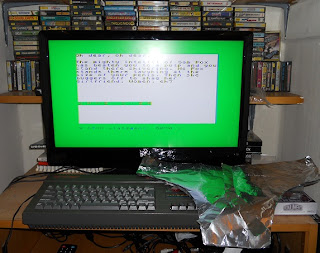 
And for the perverts, Ann Robinson’s strip snap.