By Guesser, music by Gasman

DISCLAIMER: GAME FEATURES FLICKERING IMAGES.  IF YOU THINK THIS WILL CAUSE PROBLEMS CLOSE YOUR EYES WHILE PLAYING.
Any CSS or WoS regular will know this entry has been a long time coming, with work on the engine predating this years competition.  Guesser started cranking up his hype machine earlier this year by announcing…”THEY’RE COMING”, well now finally they’re here – and what a formidable foe the Chromatrons prove to be.
Guesser points out that the purpose of the game is not necessarily to be fun (glad to hear it!) but to “wind up emulator authors”.  Load Chromatrons up in any emulator and you’ll see what he means, you can hear Gasman’s nifty AY music but this is what you’ll see:

You can just about make out the drawing through the shimmering moire pattern, and when you press caps shift to start the game it’s possible to make out a few sprites (which can naturally be controlled with the keys WASD) but that’s about it.  Clearly there is some trickery going on here, this game is specially formulated to only be playable on a real spectrum connected to a TV.  For those blessed with this set up I recommend giving it a go (128k only, paging must be enabled), and you will see this: 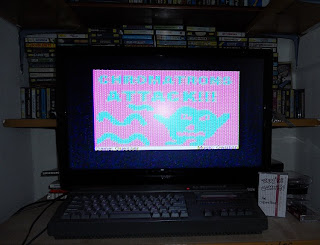 I didn’t expect that.  I thought it would still be a grey mess, just a clearer grey mess.  I’ll leave it to the hardware people to explain the technical aspects of it, but I can confirm that the attributes are set to black on white, not magenta on cyan.  Which finally brings us onto the game itself, while you can just see the sprites on an emulator what you can’t see is the scrolling landscape. 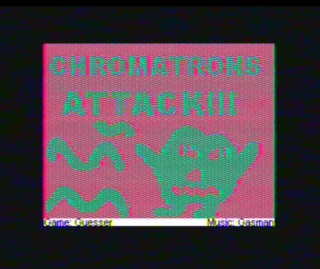 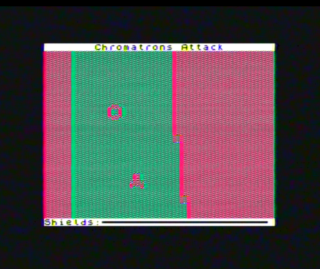 
You must pilot your spacecraft (forever it seems, there is no endgame here) while being pursued by the deadly Chromatrons.  Basically avoid the ever increasing numbers of aliens and the walls.  The sprites move in character steps and the scrolling landscape is (I think) attribute based.  The further you go the higher the score, a formula many of us love and will find quite addictive.  It’s also a great feature that your shields build up after a loss, so all is not lost if you screw up.  Guesser (or his beta tester) start the Hi Score challenge at 1923.
So this game displays a great knowledge of the hardware and coding skill (done in assembly), but is it crap?  Well the fact I’ve just loaded it up again on tape to try and beat my own hi score of 1313 suggests not, but the WASD keys might just be enough to save it…
Thankyou Guesser!
Download the TAP file here.
Download the WAV file here.
Posted by Dave at 16:08