Genre: Sport: Carp
Firstly bonus points and some kind of prize (I keep saying that don’t I, at the end of the year I’ll have to invent a fair few special prizes…so be it) for the first inlay of the competition!  Just imagine, it’s 1985, you walk into John Menzies to see what’s new and you see this: 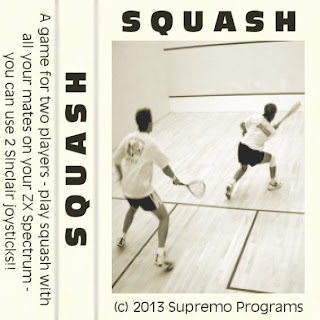 Wow!  Action!  Pace!  Strategy!  This beautiful inlay invokes all this, so like all inlays the game must be equally as good…mustn’t it?

Well, let’s see: no loading screen?  Check.  Doesn’t autostart?  Check.  No text wrapping?  Check.  ROM font?  Check.  It’s probably a safe bet to assume it’s not going to be in the same league as R-Type then.  Well sorry to be so harsh, because actually I rather like this little game.

SQUASH! is a two player game that can be played with two joysticks, though the key selection is nicely spaced out anyway.  The aim of the game, like Squash, is to keep the ball in play and try to wrongfoot your opponent.  It’s not bad as it goes, the ball jerks around in a barmy fashion and there is a feeling of tension as you race (well, trundle) to reach the ball.  There is a little attribute cleanup bug but that’s not a problem, and actually gets bonus points!

I’m ashamed to say that I currently find myself short of time, a playmate, a DivIDE interface (ok I could put onto tape but see time) so I’m not going to play this on my real Spectrum just yet.  I do think it would suit the real hardware experience quite nicely though.
Ball bouncingly CARP!


Thank you Richard!
Tipshack:  Give your squash partner a dead arm so you have the tactical advantage, if not the moral high ground (use that trick with the middle knuckle protruding).


HACK SACK: Why not change line 7020 to give you a really big, though ineffectual bat.

Download game here and the inlay here.
Posted by Dave at 04:39