Genre: Arcade: Attack of the ports
I first received the SAM Coupe version of this game, and in spud’s words it’s ‘a crap, lazy good for nothing cynical quick profit attempt at publishing a game for the SAM’.  If you want to sample the delights of the SAM (firstly don’t judge it on this game alone!) but aren’t lucky enough to own one, try the rather splendid Sim Coupe emulator. ASSI2600CS is a straight port from the Spectrum, and like many games directly ported from it they failed to play to the new machines strengths (just mention R-Type to any Amstrad CPC fan and see what happens).  I’ve not seen the original Spectrum game but judging by this it must have been pretty rum to begin with anyway!

Then a couple of days later spud ported the SAM version back to the Spectrum and submitted it, confused?  Good.  The two versions are obviously very similar, though the Spectrum one is upgraded with an intro screen drawing that would be more at home magnetically attached to a fridge*, and a grating siren noise.  A good start.
*and I presume, not done by jaco - Blackjet's graphics guru

This Space Invaders clone actually plays pretty well, it’s fast furious and difficult.  It certainly draws you in to see how many times you can beat the level, and that’s when you start to notice a few bugs.  Firstly when the aliens change direction, they all adopt the same graphic, there is also an occasional graphic cleanup problem and on the ZX version the border colour is not set until you hit an alien.  This may sound like small beer, but these subtle and natural artifacts make for a very satisfying crap game.  The SAM Coupe version also seemed to get locked at the start of one game, though I wasn’t able to reproduce this.


It’s nice to see tradition honoured in the ZX Version, instead of a bonus mothership we are treated to the advanced lawnmower man. 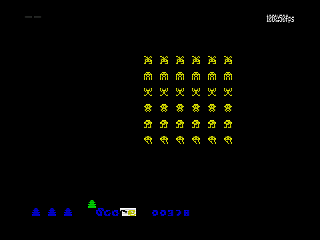 If this game had a bit more polish, less bugs and some sound effects it would be an excellent Space Invaders clone.  Just as well it hasn’t!  Thankyou spud!


And as this marks the 50th entry to the competition, this prize will be on its way to spud as soon as I knock up the certificate (just ignore what I said earlier). 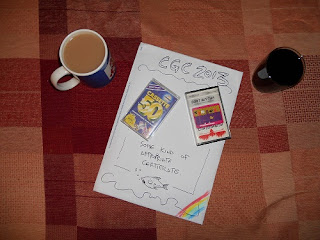 The next numerical prize will be for the 100th entry, god forbid we get that many....


Tipshack: I can’t give tips to any die-hard Space Invaders experts but I found sticking to the offsides of the alien herd worked quite well.  The score does not get zeroed at the end of the game, so to get a top high score just play it over and over again!