Here we have davey’s second entry to the competition, and like the last it revisits some of his work from the 80’s and has a scatological theme.

From a crap game point of view there are just too many things 'wrong' with this, so many in fact it’s easier to list as bullet points:

A pink hippopotamus is on the rampage and defecating all over town, in this game you assume the role of Mark Barton Dung who must roll the giant faeces into his turd burger making machine.

After you pick your jaw up off the floor and start playing, you start off as a cute little bug and you must eat until you are big enough to move the hippo droppings.  Avoid the roaming baddies, some deplete your energy, others are not interested in you until you are big enough to eat – then they chase and eat you.  You can’t push the dung but instead you walk through it, and it appears in your previous space.

It is great to play but I’m especially impressed by the graphics.  DD works with the spectrums attribute quirks to look as if we’re getting more colours per square than normally possible.  Doing this does mean the sprites move in 2 character steps but it gets away with it (1 space would have been possible but probably harder to code).

One to enjoy, and complete. 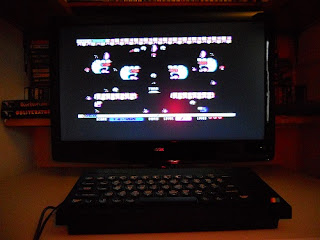 Tipshack: In the later levels try to eat the best placed last object, often farthest from the chasing baddies.  Levels 17 and 20 are particularly difficult, and sometimes you might want to wait (if you can last) until a blue/white pill appears to get the advantage.

Download alternative: Thisgame is too good to sell short, so I’ve ‘done a Harry’ on it: download the toilet humour free version with QAOP keys: BugBurger.  (Sorry davey!)

HACK SACK: as this game is a bit special, I asked hacker extraordinaire Andrew Ryals to do some POKEs: <<HACKS PENDING>>
Posted by Dave at 19:21