What the devil is going on??!!  A 2 dimensional scrolling starfield?  A smooth vertical scrolling shoot ‘em up?  Sprites?  Machine code?!  Fear not, this can be explained by the fact that L.T.L was created using two designers: Intro Maker and S.E.U.D, both utilities authored by arch-enemy of the crap games competition Jonathan Cauldwell.


In LTL you scroll downwards and shoot upwards, shoot the moving objects for extra fuel, the score ticks along as you descend.  There are 4 levels in all and a fiendish end of game boss.  Check out the instructions for the obligatory barmy backstory and other info.

It doesn’t have the most sophisticated graphics in the world but the design and playability are well thought out.  Larry the Lander is as tough as old boots, the tortuous and tight maze sections are near impossible to negotiate and there are numerous lures and pincer traps along the way.  Jammajup assures me it can be completed, and has even recorded a video to prove it.  I can only assume that the cruel difficulty gradient in LTL is tailored to oldschool gamers, not modern lilly livered softies of which I am one.
The verdict?  Maybe lacking polish but certainly NOT CARP!
Still, thankyou Jammajup, I enjoyed playing this and will actually be returning to it.  Just one thing Larry....gizza smile. 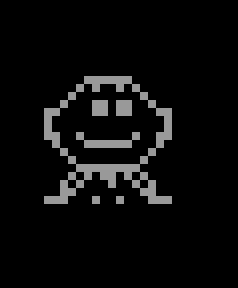