Genre: Softcore sprint
Here we have a lovely entry from the 2011 host, a game he coded in 1993 (the Golden year of the Spectrum) and I can’t sum up the gameplay better than na_th_an himself:
”You have to run smashing O and P to get to Syrums. Whatever it is. There's a nasty green boulder chasing you, so you better run. There's also somebody throwing nasty cyan boulders to your face”
Of course there is.

I’m surprised that we have reached the second month of the CGC and this is our first ‘button mashing’ game.  Having to toggle two unresponsive keys to meet some barmy objective is the hallmark of a solid crap game and in this respect RFS doesn’t disappoint.  The main protagonist is for some reason totally nude, which those familiar with the Mojon Twins games will know is their stock in trade.
RFS appears to be coded in compiled basic (maybe asm) and sports some rather advanced scrolling.  The gameplay is pretty dodgy though not impossible to get into.  I managed to get the metre count down to the 3000’s mark but I can’t (ie - won't) do better than that.  So I don’t know what happens when you actually reach Syrums…..who knows, maybe the lady gets a wooly warm cardigan and a nice sit down. 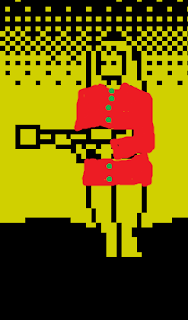 
Tipshack: Place masking tape over the bottom half of your tv screen, that way you won’t be distracted by the naked ladies.
Download here.
Posted by Dave at 19:09