By daveysludge
Genre: Scatform
GOOD GAME ALERT!  So good in fact that I’m reticent to review it as a CGC entry, especially as I know how much work has gone into it.  I’ve been following the trials and tribulations of davey’s machine code help threads on the World of Spectrum forums, and I get the impression he’s been having a lot of the same agonising bug fixing problems that I had.  Nevertheless, it has been submitted to the CGC, isn’t perfect and is called Thunderturds, so here goes.

In this game you are Scott Faece, and you must soil all the blue tiles while avoiding various dung themed baddies (oh and a laser beam).  So in principle TT is a painter game, though perhaps dirty protest would be more appropriate. 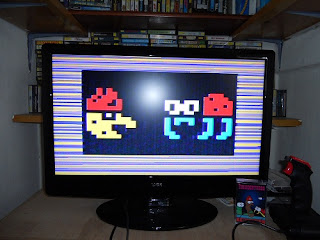 Given that it’s a wet Sunday afternoon, and davey provided me with WAV files it seemed rude not to load on it onto real hardware.  Firstly notice the lovely loading screen, which is an animated image that takes advantage of the Spectrums flash attributes (not only that, the intro screen has a rainbow effect!). 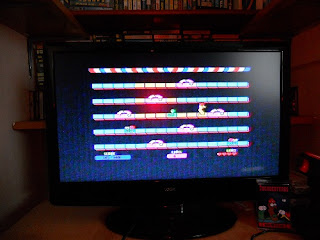 The game inlay describes the game as joystick only (but keys 67890 work fine) so for the first time ever I had a go with one.  I’ve never been a joystick waggler, and despite my unresponsive old stick (oh puhh-leees) it works ok .  All the sprites move in character steps, which enabled davey to put some fantastic colourful graphics together – these and the animations on collision are outstanding.


TT has a good difficulty gradient over the 20 levels, and gets quite frantic towards the end.  Very enjoyable.


The bad points?  A few times the baddies got trapped behind a block, which meant you couldn’t ‘get’ that square and complete the level, a small bug* when it loops around after level 20, and for me the scatological theme. 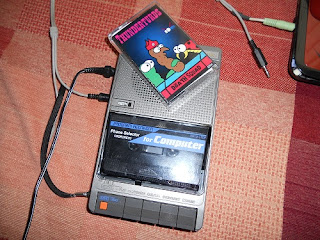 *daveysludge has uploaded a bugfixed version, which gives a 'sort of' end of game sequence and loops.
Posted by Dave at 22:20