Genre: Arcade: canine cash pursuit
First off we must give bonus points to this lovely inlay and loading screen that makes Rosco the Cat Burglar the complete package. 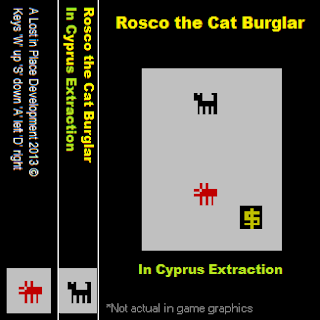 Not actual in game graphics?  Ah I get it, that pic must be the Amiga version.﻿

Poor Rosco the cat, he has been wise enough to invest his money in a bank account (and for a cat 80 spond is quite a lot) but unfortunately it’s locked up in a Cypriot bank until the financial crisis is sorted.  What’s a cat to do?  Break in of course!  But with police response times as they are you have 60 seconds to get your money back, as long as you can evade the angry dog.

A winning formula here, moving around the screen being pursued by a slightly slower object.  Lost has clearly put some thought into this as the allotted time, reappearance of the dog and the next money wad seem finely tuned for frenzied gameplay.  If the dog gets you once, then your score is depleted and you may as well restart the game.  Even if you can evade the rabid dog it is still not guaranteed you will be able to get the full £80, it all depends on where the cash reappears.
This one ticks all the boxes for me, slightly iffy UDGs, crap keys (wasd) and a substantial reliance on chance.  Good fun and I hope it’s not the last in the Rosco the Cat series.  Thank you Lost!
Tipshack: Be especially vigilant after collecting some money, the dog can reappear in a location very close to you.
HACK SACK:
Line 301, change 60 to whatever time you fancy.  65 makes for a slightly easier game, but I think Lost has tuned it right with 60.
Lines 330-360, change the stinky wasd keys to something a bit better (for example a sane person would choose qaop).
Download here.
Posted by Dave at 23:36

Email ThisBlogThis!Share to TwitterShare to FacebookShare to Pinterest
Labels: lost